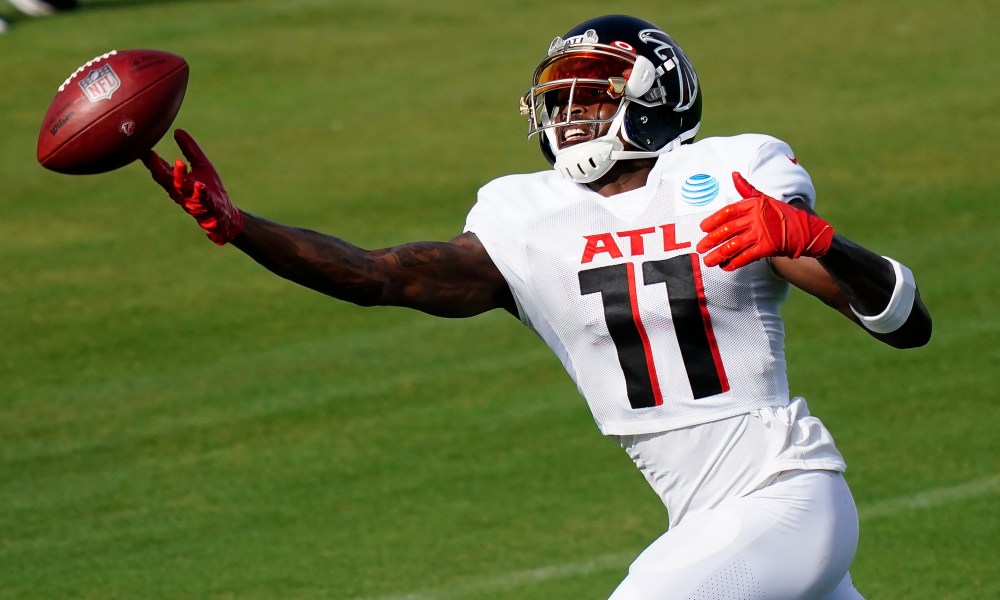 Finally, it is time to find out where Julio Jones will play next. We have all waited anxiously for June 1st and have been tracking trade rumors every step of the way. There is one team that is a clear front runner to land Jones in a trade with the Atlanta Falcons, but other teams are rushing in to make one last attempt at trading for Jones. It’s time to break down the Julio Jones odds and offer up predictions on his next team.

Fans can bet on where Julio will play next, for this breakdown we used odds from multiple sportsbooks and watched how they changed and observed new teams that have emerged late to try and get Jones. Here is a breakdown of each team, their chances according to the odds, and finally our pick.

Bill Belichick and the Patriots have been connected with Jones for a while now. Although the Patriots love adding veterans to improve the roster, Belichick wants to get a bargain. That may be hard in a market that is as crowded as this one. They may have to bend more than they want to if they want Jones. They are the favorites for many reasons and the odds can be found as low as (+150), but this is a wide-open race.

The Titans have been the only team that is keeping pace with the Patriots. The Titans players are using social media to attract Jones and it may be working. They are in hot pursuit for Jones, but the latest rumors suggest the Titan’s best offer is just a second-round pick.

Titans emerge as the perceived favorites to land Julio Jones, for a second-round pick in 2022 – ProFootballTalk https://t.co/bUW25eVh7X

That is not the most impressive offer, but if the Falcons want to choose where they want to send him, the Titans make sense.

The Colts news and rumors surrounding Jones are minimal, yet the latest sports betting odds still have the Colts listed as one of the top teams to get him in a deal. With draft picks tied up after the Wentz deal, if the Colts are going to make this deal, they will have to get creative.

Which team has the best package for Julio? 👀 pic.twitter.com/qwgh7fhBI7

This deal will look appealing to Colts fans, but it seems as other teams will be able to match, or beat, that offer.

The Seahawks are the latest team to jump into the fray in an attempt to get Julio Jones. They have some “interest” but the offer is not clear at this moment. But as early as today they were made the favorites to land Jones at this prestigious sportsbook.

Seahawks reportedly ‘have had discussions’ about a trade for Julio Jones. https://t.co/ZIVwPEKTP1

Jones on Seattle is incredible to think about, but this may be a move by Seattle to make the 49ers pay more if they want Jones. After Russell Wilson and the Seahawks had a falling out a month ago, it will be an incredible move to get Jones, but it looks unlikely.

The connection of Julio Jones to Kyle Shanahan is inevitable.  The 49ers are also a Super Bowl contender and this is something that is very appealing to Jones. The Falcons were once passing on any team that is in the NFC, but that may change if the 49ers are willing to pay a big price.

Asking around league on Julio Jones, teams are watching 49ers closely, though uncertain how far they’d go after giving up 1s for Trey Lance. Ravens would be willing to get involved at right price. High demand plus $15M salary a hurdle. Teams could ask ATL to cover some cost.

The 49ers cannot be counted out, but the money is the issue. The 49ers will have to mortgage so much of their future that fans may be happy with a Jones deal now, but it wouldn’t last long.

The Ravens are always looking for a wide receiver. However, talks and rumors surrounding the Raven’s desire to get Jones, have been lackluster at best.  It seems like the Ravens will be interested in Jones if they can get him on the cheap.

The Ravens should absolutely do what they can to get Julio and get Lamar back to his MVP level play.
Imagine that offense in the red zone?!#NFL #JulioJones https://t.co/PjWuAZL881

However, this is a very professional organization that is very good at keeping its business practices quiet. The Ravens are an interesting underdog to watch in the race for Jones.

What about Green Bay? Well, they have their own issues.

Although my friend believes that the Patriots are the team to get Jones, I disagree. The Falcons organization cannot stand the Patriots and a deal with New England is going to be too difficult to do.  There may be a surprise team emerge at the 12th hour, like the Las Vegas Raiders (+1200), but the one team that needs to make this deal is the Tennessee Titans.

For my money, the Titans will sign Julio Jones.

Julio Jones to the Titans +200