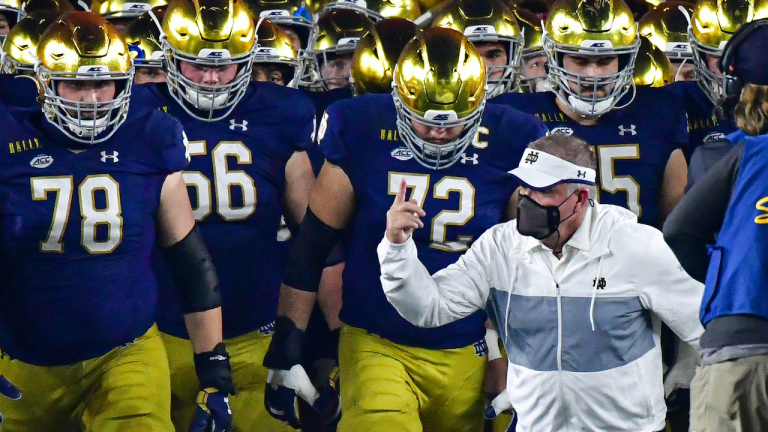 The preseason college football rankings 2021 now have the associated press top 25 poll for college football fans to discuss. This poll is voted on by college football media members and it is often similar to the USA Today coaches poll. However, there are always a few teams that are ranked incorrectly and this year is no different.

Get the best lines, props, and live betting with fast and free payouts when you bet on college football. Click here for your $750 Welcome Bonus!

Where the Poll is Right

The AP Top 25 poll did get a few things right. However, some of the rankings are hard to get wrong, especially at the top of the polls.

The Crimson Tide is the Team To Beat

Alabama is obviously the top choice and is rightfully ranked in the No. 1 spot. They are the clear-cut favorites to win the National Championship under the guidance of Nick Saban. It wasn’t even close as they toppled No. 2 Oklahoma and No. 3 Clemson. The only other two teams getting first-place votes were No. 4 Ohio State and No. 5 Clemson.

Bearcats Will Be Tough To Beat

The Cincinnati Bearcats are in the top ten to start the season. The Bearcats sit at No. 8, and they may finish higher.  They have a veteran QB in Desmond Ridder who can manage the offense, but this team is all about defense. A year ago they were No. 1 in the conference and 13 in the nation and they will be better this year. They can run the schedule and are a team to watch.

Sign up for free on Bovada and claim up to $3750 in sports betting, casino, and poker bonuses! Claim it today!

Where the Poll is Wrong

Nobody’s perfect and that goes for the people who vote in this poll. It’s not always easy to avoid a bias or make a logical vote if you do not see every team on a regular basis. Here are a few teams that they got wrong.

Notre Dame is Not the Same

This team lost many starting pieces, yet they don’t reload like they used to. Because of their proud history, they are able to secure No. 9 in the rankings, but that is a mistake. The Irish lost four offensive linemen and they had nine players go to the National Football League. This will take some time for this team to gel and that will result in losses early. With tough games against Cincinnati, USC, Wisconsin, and Virginia Tech, to name a few, the Irish will finish out of the top 10.

Penn State is slated at No. 19 to start the season, but that is too low. They ended the season on a four-game winning streak and they have senior leadership on the offensive end of the field. Coach James Franklin knows to recruit and if they can pull off the upset at Ohio State this team can make the playoffs. Even if they lose that game, at the end of the season Penn State will be a top ten team.