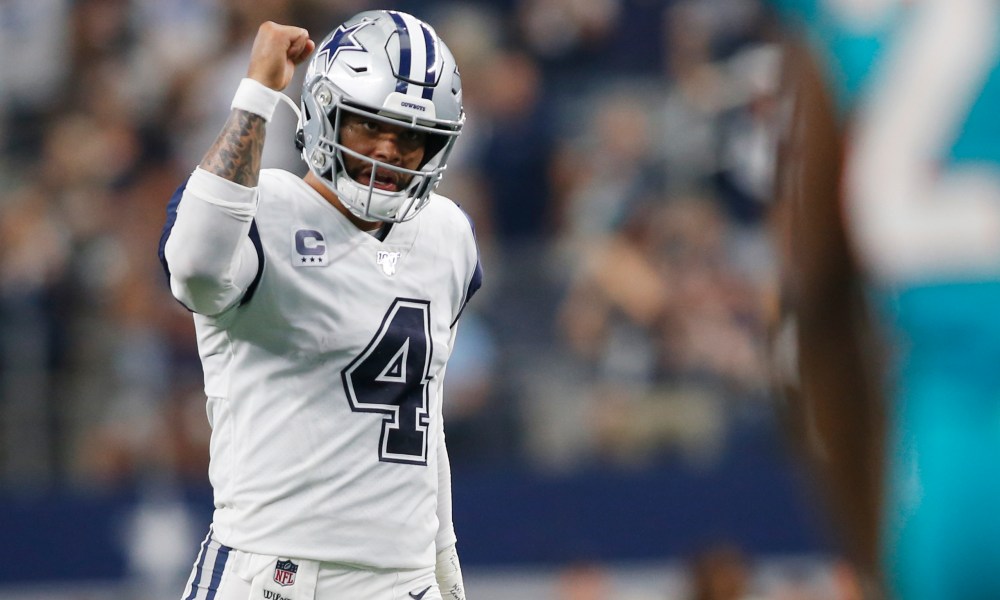 Every season players in the NFL get hurt. In fact, by the time the calendar moves to December almost every player in the league is battling injury and is just trying to survive to the end.

Some make it to the final week, others don’t, but all of them are focused on getting healthy during the offseason. It is important to keep up with the NFL injury updates.

In October, Cowboys quarterback Dak Prescott suffered a devastating compound fracture of his ankle. At the time it cast doubt on a future extension, as well as where he might be playing in 2021 if he would be playing at all. They need him under center if they want to win the Super Bowl, although the odds say Dallas is a longshot.

Fast forward seven months and not only does Prescott have his new contract, keeping him in Dallas long-term, but he is also practicing with the Cowboys at OTAs. He’s not 100% yet, but the timeline of him being a full participant in practice by the time training camps open in July feels like a pretty safe bet.

Time will tell if the injury changes his mobility in the coming season and beyond, but seeing him throw passes again is a positive step for all involved. Betting markets feel good about Prescott’s return as it relates to the Cowboys winning their division. Dallas sports the lowest odds of +110 on the betting board to win the NFC East next year.

Bengals quarterback Joe Burrow suffered a serious knee injury in Week 11 of his rookie season, tearing both his ACL and MCL and resulting in reconstructive knee surgery in December.

The doctor who performed the surgery recently said that Burrow is on track to make his return to the field by the opening week of the 2021 season, saying that the young quarterback is doing everything right in rehabbing the injury.

“He’s worked his tail off,” said Dr. Neal ElAttrache. “He’s been an amazingly mature participant in his recovery. He’s focused and great to work with.”

He went on to say that the knee is performing perfectly for this stage of the recovery, and all systems go for the start of the season.

That also seemed to be the message the Bengals were sending when they released a video of Burrow working out this week. He’s noticeably bigger in the upper body, and both the team and fans hope he’ll be better suited for the rigors of a full NFL season.

Bettors aren’t as confident in Burrow’s return to bolster the Bengals to success. Cincinnati sits second-to-last on the odds board to win the AFC next season at a +5000 price, trailed only by the lowly Houston Texans at +7500.

Sadly we haven’t seen enough of Derwin James on the field since his standout rookie season. The All-Pro as a rookie has played just five games over the last two seasons because of injuries, losing all of 2020 to a torn meniscus suffered in training camp.

However, James is now fully recovered from that injury, and the Chargers had their safety back as a full participant when they began OTAs this week.

New head coach Brandon Staley said of James, “He looks great. He sounds great. As you know, one of his strengths as a football player is his leadership and the energy that he gives everybody each and every day. He’s a multiplier out there. When he’s out there our chances increase by a whole bunch.”

In his rookie season of 2018, James finished with 105 tackles, 3.5 sacks, and three interceptions.

The Broncos welcomed future Hall of Famer Von Miller back to the field at OTAs on Monday. He lost all of 2020 because of a dislocated tendon in his ankle that required season-ending surgery.

When asked if he was back to his old form, Miller said, “It never left.”

Head coach Vic Fangio also confirmed that Miller still has what it takes at 32, saying that the MVP of Super Bowl 50 looks just as fast as he ever did.

Christian McCaffrey Back on the Field

The Panthers have a new quarterback in Sam Darnold. But everyone knows that the offense can only be successful if Christian McCaffrey is healthy and on the field. Last year he wasn’t, suffering a high ankle sprain, a shoulder injury, and a quad injury, that kept him off the field for a total of 13 games.

He is now back, looking good and feeling good. Hopefully, with Darnold under center, he can return to his 1,000-1,000 form from 2019 and thrive in Joe Brady’s offense in Carolina.