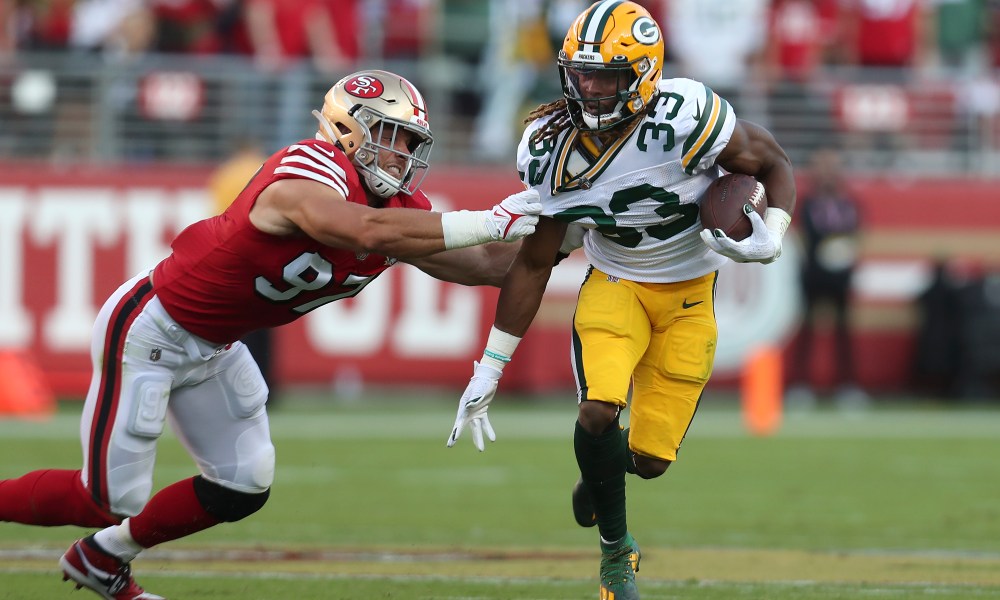 With plenty of great NFL Playoff games to watch this week, it may be hard to pick a favorite. However, the game featuring the San Francisco 49ers and the Green Bay Packers is going to be a good one. Trying to make 2022 NFL Divisional playoff predictions for this game will not be easy.

The 49ers are not an easy team to beat. After defeating the LA Rams in the season finale to make the playoffs, they stunned the Cowboys to advance to this game. They have taken down two of the best teams in the NFC to get to this point and they should not be overlooked. This team plays solid defense and is backed by an incredible rushing offense that puts pressure on opposing teams. But injuries and inconsistent play plagued this team heading into this round.

The 49ers may not have QB Jimmy Garoppolo in the lineup. According to reports, Jimmy G is dealing with multiple injuries to include a sprained shoulder on his throwing arm. Although nothing is confirmed, where there is smoke there is fire. And the wise guys are responding. The Packers opened as -5.5 favorites, but the line is up to -6 at most outlets. Of course, this may be due to the fact that the Packers are the favorites to go to the Super Bowl.

Packers Have One Goal

Aaron Rodgers and the Packers have one goal; to win the Super Bowl. Every team wants to win it all, but it’s different for Green Bay. This may be the last year for Rodgers and this team has all of the pieces in place to succeed. It comes as no surprise that the Packers are the most popular bet this weekend, according to sportsbooks. It may have something to do with the fact that the Packers are 12-4 against the spread (ATS) in the last 16 games overall.

With or without Jimmy G, the 49ers can keep this close. They beat the Cowboys despite some ugly missed passes and turnovers. This offense is good enough to run the ball and control the time of possession. But Rodgers and Co. don’t need the ball for a long period of time to put up points. But it won’t be easy against a 49ers defense that is tied for the 4th fewest points allowed in the league. They pressured Dak 22 times and sacked him 5 times and that could cause problems for the Packers front.

The 49ers are feisty underdogs and have cashed in 6 of the last seven times against the spread when getting points. They are also a perfect 8-0 ATS in the last eight games played in January. This game will come down to the wire and the 49ers may not win, but they will cover.

[BET WITH THIS MEGA BONUS]